It’s easy to think of Shibuya as the center of Tokyo. It’s on the Yamanote line nestled between Harajuku and Ebisu and has everything you’ll ever need from karaoke rooms and subversive fashion boutiques to top-class restaurants and cool record stores. It’s the Tokyo you dream of and the Tokyo you desire.

Once the center of youth culture in Japan Shibuya has matured in recent years due to the country’s much publicised ageing society. This has been reflected, recently, by completion of the huge Hikarie complex which is situated next to Shibuya station and is targeted at middle-aged women. Sure, Shibuya still has B-boys and gyaru and even the odd yamamba girl but it’s mainly a perfect salad of young and old, salary-men and OL, tourists and natives and high end and low end stores and restaurants.

Known for its insanely busy “Hachiko” crossing where millions of people cross every day illuminated by neon and giant TV screens it’s the area which partly inspired Blade Runner and has been filmed numerous times over the years. Shibuya is a shopper’s paradise but it also serves as a cultural hub with galleries and museums such as Bunkamura, independent cinemas, small pocket parks and also plays host to some great craft beer pubs such as Good Beer Faucets and The Aldgate. There’s no natural order to Shibuya – it’s beautiful chaos, so it’s best just to lose yourself in the backstreets and succumb to the area’s multitude of charms. 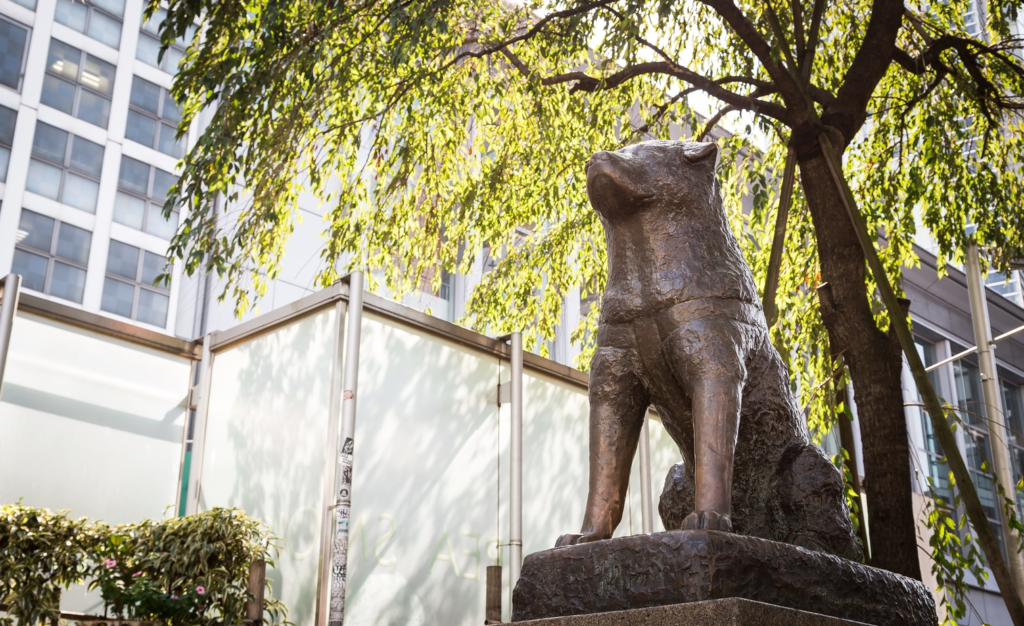 Shibuya has everything you need. Department stores such as Seibu and Parco, fast fashion empires like H&M and Uniqlo have flagships located here, underground and hip boutiques such as Candy, Sister, Lad Musician, Neighborhood, secret coffee hideouts such as Filbert Steps and neat places like Tokyo Main Dining which is the best place for people watching while quaffing cava and a selection of Japanese beers. It also has a good food selection too. Shibuya comes alive at night and has some of the capital’s biggest and most respected clubs such as Womb and Sound Museum Vision as well as plenty of late night dive bars and ramen restaurants to satisfy your post-drink hunger. Slurp away with the locals and don’t be shy to ask for recommendations and favorites.

Shibuya is a city that never sleeps. Noisy, brash and chaotic it’s not the place for you if looking for some solitude or a quiet moment. Similarly if you don’t like crowds and cramped back alleys and boisterous locals then maybe best to head to nearby Daikanyama which has a more laid back and sophisticated atmosphere.

Shibuya, like most of Tokyo, is very fashion forward. Lose yourself in the department stores and backstreet boutiques and you’ll be sure to find some gems. There are plenty of top rate record stores in addition to the mammoth Tower Records which also plays host to gigs and events. The Tomigaya area of Shibuya has recently transformed into a hipster playground with the opening of Scandinavian cocktail bar Fuglen and the Monocle store and HQ. If you’re looking for a classy evening with a spectacular view then head to Bello Visto on the 40th floor of the Cerulean Tower Tokyu Hotel.

The moment you step outside the “Hachiko” exit in Shibuya station as you are birthed in neon and the cacophonous commercials and traffic you’ll feel absolutely elated. It’s like being born again. Shibuya can have a strange effect on people and it’s best just to get lost in its labyrinths and eat, shop, drink, look, touch, dance and live.

Find your property in Tokyo

The Pioneer of All Residential Areas in Japan Denenchofu is a famous high-class residential area in Japan. Around D...