HOME
Emergency
Wayfinding during an emergency: Living in Japan Information

Knowing the location of emergency exits helps you take proper action when an unexpected event happens. In preparation for disaster, such as fire, you should check an emergency sign and the evacuation route at places you are; at your apartment, hotel, subway station, and shopping mall.

How to read emergency signs

In case of emergency, a fire, for example, you can find an evacuation route by following an emergency sign which has a human pictogram indicating an emergency exit. The emergency sign is basically in green color and is provided with 3 different types in accordance with the distance from the exit door;

White signboard with a green pictogram and arrow

This emergency sign indicates the direction of the way leading to an exit. People can reach an exit door by following the arrow on it.

Green signboard with a white pictogram and arrow

Green signboard with a white pictogram, without arrows

This signboard is placed at an emergency exit door. The sign sometimes comes with Japanese characters ’非常口(Exit)’ instead of a pictogram. 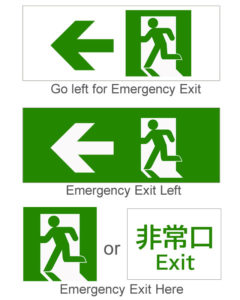 Wayfinding during a fire evacuation at apartment or hotel

In case of a fire at storied buildings, people should use stairs for evacuation. The building standards law Japan (BSL) requires storied-buildings to ensure two ways of evacuation, stairs and fire ladders in most cases. In principle, using stairs must be the first option as stairs are built by a fireproof construction so that people can exit a building safely, as long as they act calmly.

What to know about using stairways during a fire evacuation

One crucial act during a fire evacuation is to close doors when you leave your room and then head to the emergency exit so that you can shut out smoke from the stairway area and secure an evacuation route for everyone there. It says smoke can spread 3 or even 5 meters per second, comes up to upper floors very quickly, making people hard to exit the building. In fact, carbon monoxide poisoning by breathing the smoke is the biggest cause of death from a fire.

If the building is already filled with smoke, keep a low posture, and cover your mouth and nose to prevent from breathing smoke while heading to the exit. In an emergency, people tend to panic and rush into an exit door all at once. We should keep in mind that staying calm and taking proper action is the key to escape safely for each other.

For your best Housing

Guide to Renting apartments and houses in Tokyo

Overview: The Leasing Process RISE Corp is a leading real estate agent in Tokyo with years of experience assisting expa...

Living in Japan | How to dispose of household waste – Part 2

Things to know about riding an electrically power-assisted bicycle (e-bikes) in Tokyo, the traffic rules, and how to make use of it.