The country of Japan is an archipelago alongside north to south, mostly has a warm and humid climate with distinct seasons – spring, summer, autumn and winter. Although there is no rainfall-based division such as wet season and dry season, summer in Japan usually has more rainy days than winter, and typhoon may approach between June and October. 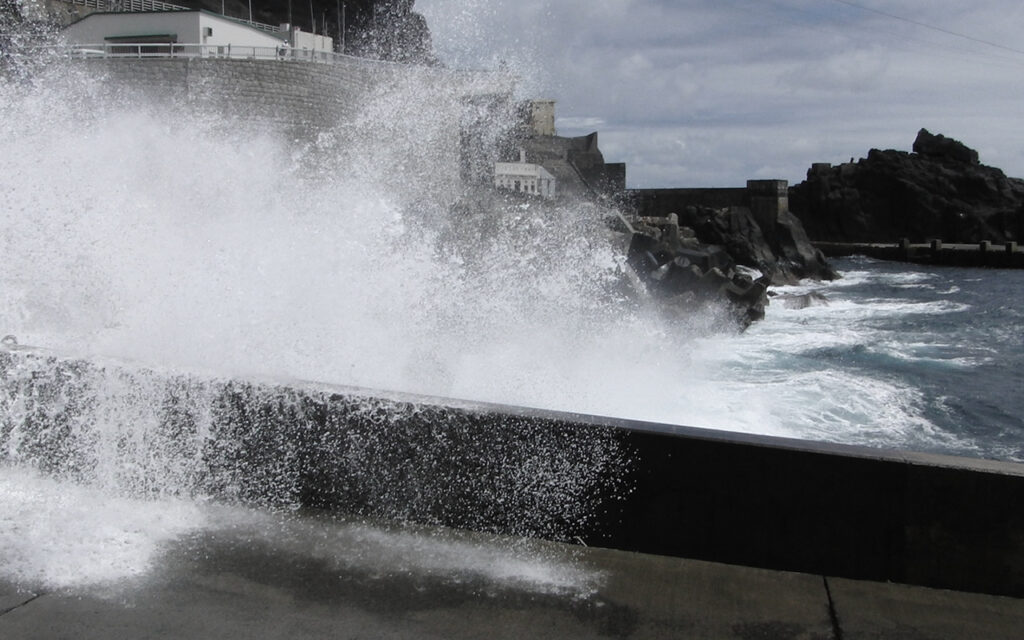 Typhoon, an intense tropical cyclone, appears in the western Northwestern Pacific region between 180° and 100° E. According to the Japan Meteorological Agency (JMA), a typhoon is defined as a tropical cyclone with its system sustaining (at 10-min average) a maximum wind speed of 17m/s (34 knots, Wind force 8) and over. Typhoons usually form at sea near the equator, moving up in an arc off the east of the Philippines. Some typhoons approach Japan, bringing massive rainstorms that last till the typhoon goes through northward. 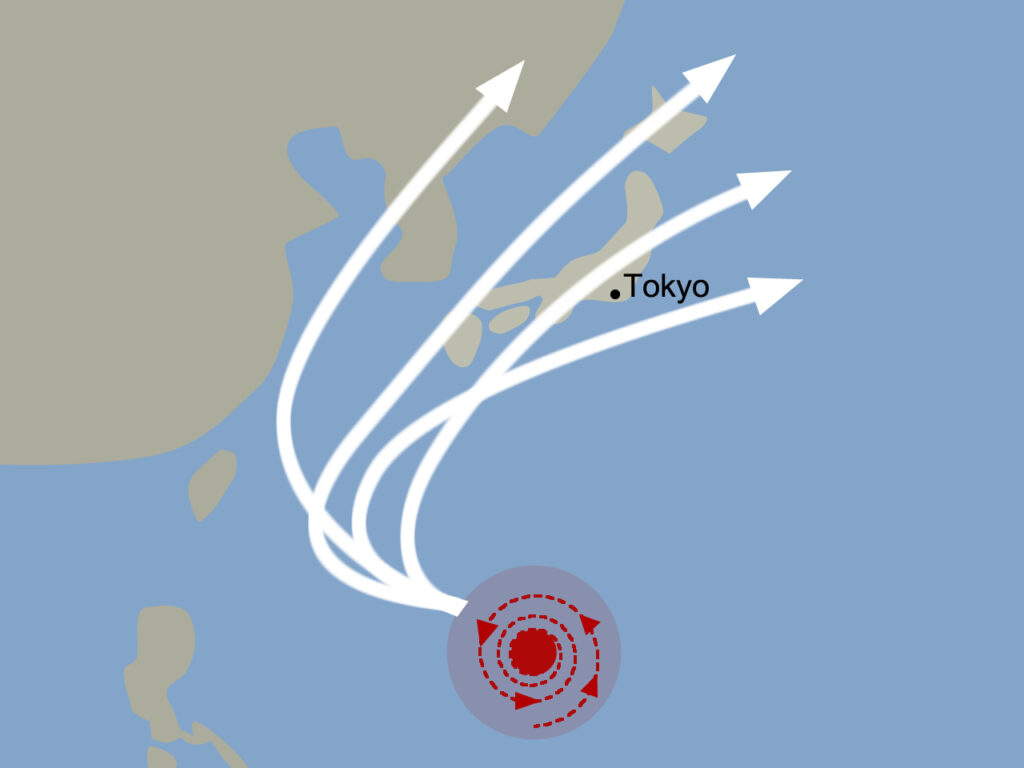 In Japan, typhoons are usually named by numbers in the order of their occurrence. For example, the tenth typhoon that occurred in the year is called Typhoon No. 10. Instead, massive typhoons that brought catastrophic damages are named after the disaster region or the year of the occurrence.

Typhoon season in Japan is around from June to October.

Typhoons annually occur 27 times on average, and about 12 of those may approach the Japanese archipelago. Although the actual number of typhoons that will hit Japan is only a few or none, they can cause extensive disasters. The typhoon likely hits Japan most frequently in August and subsequently in September. However, we should keep in mind that the time of typhoons approaching is unstable due to climate change in recent years. Therefore, we need to be always prepared for a disaster all through the typhoon season.

Possible damages in residential areas and the countermeasures

When it comes to the severe damage caused by typhoons, we tend to come up with only mudslides or landslides in mountainous regions. However, we should be aware of damages that may occur in urban residential areas. It is essential to prepare for natural disasters in daily life, such as consistently securing drinking water and food. Furthermore, in the case of a typhoon approach, it is also necessary to check disaster warnings as well as the weather forecast so that you can take preventive actions before the typhoon approaches.

Possible damages and what you can do for prevention; 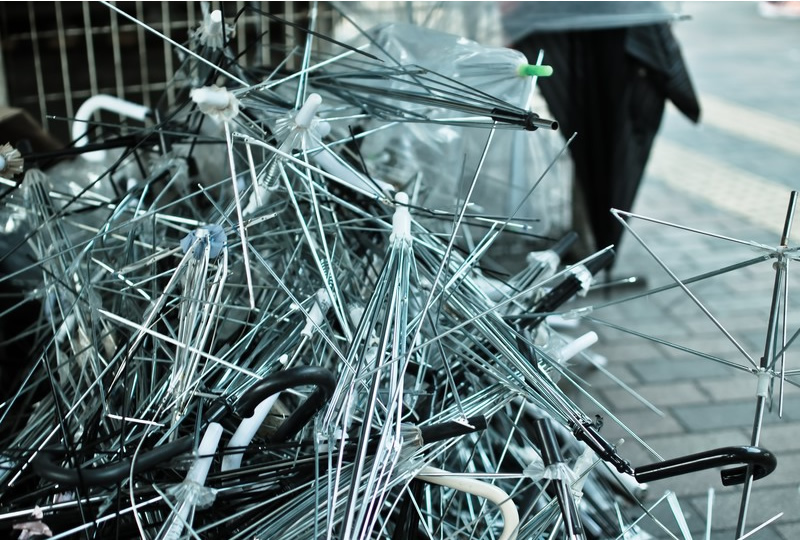 A pile of broken umbrellas left after the storm

Blackout
Power outages may occur when a storm damages power supply facilities, such as power transmission lines. Ensure battery power for your PC or mobile phone so that you can keep yourself updated. It will be secure to have a home battery.

Water supply disruption
If a water facility is down due to a power outage etc., the water supply will be cut off. Considering the situation, you need to have daily life water until the water supply is restored. It will be helpful to keep a bathtub full of water when a typhoon disaster is forecasted.

Do not flush the toilet to avoid backflows.
Prepare a portable toilet for temporary use and dispose of excrement by putting it in a sealed bag. If you flush the toilet while drainpipes are saturated with rainwater, the flushed water may flow back up.

Broken windows
Windows in your house that may break up by gusts of wind. Shut curtains when you in the room and avoid placing your bed on the window side. It is also advisable not to leave anything outside of the house that can be blown away.

River flood
Levee breach and flood may occur. Keep watch on the water level of the river in your town. People in the hazard area are required evacuation actions in advance. It is too late to take action when the road is already underwater. Head to an evacuation site in the daytime. Evacuating at night is too dangerous.

How do I decide evacuation actions?

If a flood is expected to occur, people living in the area at high risk are warned to evacuate. To find out if your home is in a hazardous area or not, check the hazard map provided by your municipality online/offline. It is suggested you check it in advance before the typhoon season comes.

Some of the high-risk areas along riverside have signboards indicating predicted water depth when a flood occurs. You may find them at public facilities, schools and libraries.

Do you know where to evacuate? Consider “Dispersed evacuation”

Due to the Novel Coronavirus pandemic, the guidance for evacuation actions has been altered. The point is that any people should not gather at one evacuation site. Congestion at the evacuation site increases the risk of infection. People who live in a no-flood-risk area are not always required to go to an evacuation center.

The guidance suggests “dispersed evacuation”, the three options mentioned below. The situation may vary depending on the size of the typhoon, the strength of the building you live or those factors, but it will help determine how to protect your own life.

Evacuation at home
If your home is not in an area of high risk of flood, and your home is a solid building with two stories or more, you may stay at home. (Evacuate in a room on a floor that will be not inundated)

Evacuation to a place located in a safe area
If you live in a flood-risk area, and you have enough time for evacuation before the typhoon approaches, go to a safe location where you can evacuate at a relative’s house, a friend’s house, or a hotel. Be sure and take action before public transport service and roads are suspended.

Evacuation center
If you live in a flood-risk area, have no place to stay safe, go to an evacuation center designated by your municipality. Prepare an emergency bag and bring it with you. It will also require you to bring towels, 2-meal-worth food and water for yourself.

If a typhoon appears, you can protect your life by predicting the time of approach and taking proper actions by getting up-to-date forecast and information on disaster risks. The Japan Meteorological Agency (JMA) and local governments provide helpful websites and apps that will support your evacuation actions.

For your house hunting in Tokyo

Living in Japan | How to dispose of household waste – Part 1

Here you find how to make the most of PASMO, a prepaid smart card known as IC Card.

Real Estate in Tokyo | An apartment & house in Japan: Equipment and furniture

Necessary information for Real Estate in tokyo and checklist to find a rental housing/apartment that better fits your requirements.

Things to know about the house ventilation system set for the climate of Japan - how it works, the proper usage, and cleaning.