The new green season from late spring to early summer is the busy breeding season for Japanese crows. During the breeding season, crows are so nervous around humans that they sometimes have aggressive behaviors to protect their nestlings, such as attacking passers-by. The crows in the city often nest at places near people live, in a tree of a garden or street, so we may need to know how to avoid trouble with them.

The crows inhabiting central Tokyo are mostly Jungle crows (Hashibuto Karasu), the large crow with a body length of about 57cm. (22.4 in.) In the suburb of Tokyo, you will more often see Carrion crows (Hashiboso Karasu), which length is about 50cm (19.7 in.), somewhat smaller than Jungle crows.

Crows are known to be very intelligent. With a higher ratio of brain weight to total body weight than a dog or cat, crows can memorize words and even identify human faces that often make western people feel attached and own as a pet. Crows in the city know they are in a carefree environment with abundant food, have characterized themselves as a bird that has a play for fun, unlike other wild birds. 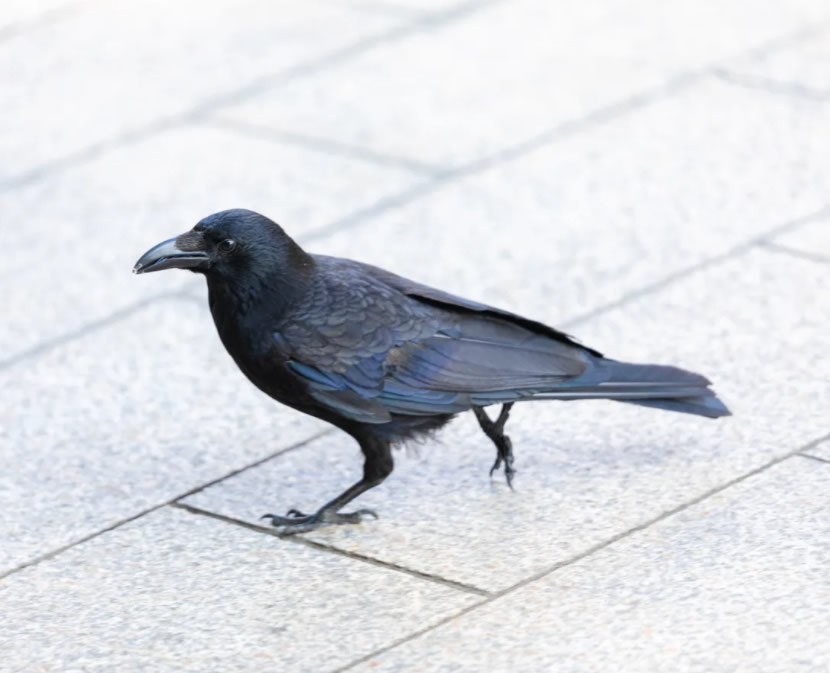 Crows in the breeding season

The crow’s breeding season begins in late March when crows in town make nests on trees in streets, parks, and shrines. Then, in late April to May, the crow lays 3 or 5 eggs that will hatch about in two weeks and takes care of its nestlings over one month. During the parenting period between April and June, people tend to have trouble with crows at most vigilant about the danger nearby.

Things to keep in mind during the crow breeding season

When a breeding season begins, crows make their nest by collecting something obtainable nearby – twigs and wire hangers. It seems hangers particularly come in handy for crows as the Japanese often hang out laundry to dry at the balcony, where crows come and get hangers quickly. Therefore, it is better not to leave stick-like things at balconies as well as hangers.

Stay away from crow’s nests (April to June)

Crows in parenting between April and June are so tense that they consider anyone near their nests dangerous, may attack people passing by. The best way to avoid crow’s attack is to keep away from their nest, that is all. If you hear a ticking noise or cawing while walking on a street, a crow must be alarming you. In that case, you turn around and take another street to go. If you have no choice but to pass the street near a nest, you can avoid the attack by holding a cane or umbrella vertically near your head. You can also lift your arms alongside your ears for protection. Crows attack with their feet as they cannot peck with their beaks while flying due to their body structure. Things beside your head can make crows hesitate to attack as they afraid of damaging their winds. 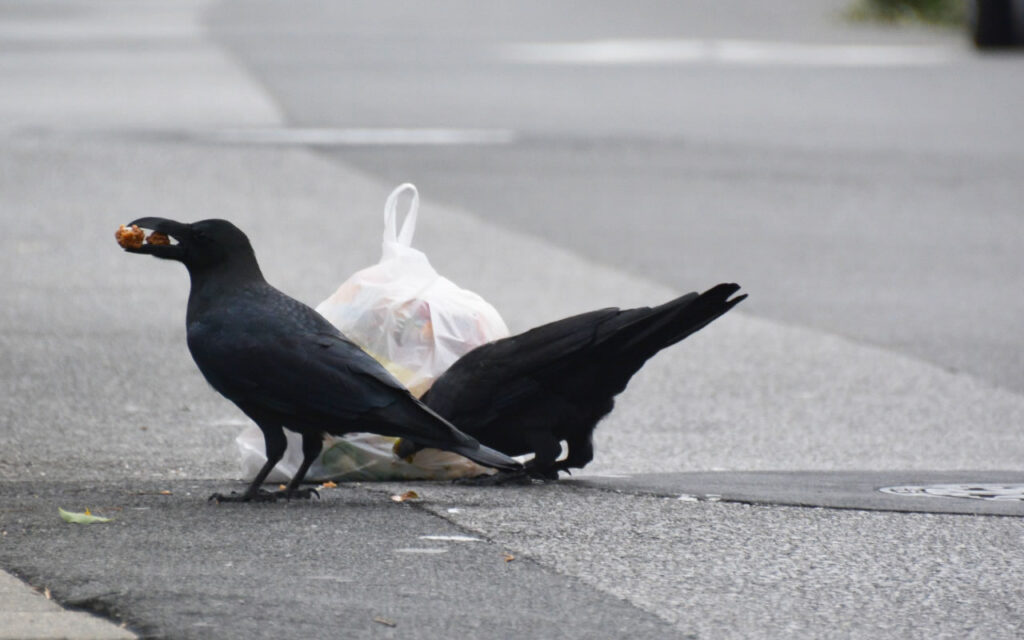 Put the garbage out properly (All year round, especially from May to July)

In Japan, house waste is disposed of by putting in a transparent/white bag and taking out at a collection point (Gomi Shuusekijo ゴミ集積所). Crows may come up to the collection place and pick garbage bags to find food. Remember, the garbage messing by crows happens throughout the year, especially during the breeding season. However, it is easily avoidable if everyone puts out garbage properly by following basic manners, that are;

Do not leave garbage bags outside in the evening.
Put out the garbage in the morning with consideration of the time when the garbage truck comes. (The best will be just before 8:00 AM.) Garbage bags should not be left outside for a long time at collection points, also on balconies. Although crows are diurnal and not actively looking for food at night, they come up very early in the morning and enjoy “breakfast” while people are still in bed.

Do not let the crow see inside of garbage bags.
Crows detect food by seeing, not by smelling. If a crow finds food inside the garbage bag, it pecks the bag to get the food out. Crows will not target the bag unless they see no food inside. If you have to dispose of food waste, red meat, fish or wet food, wrap it with paper and put it in the back of the garbage bag to not be seen from the outside.

Put a crow net over garbage bags.
Garbage collection points in Tokyo are usually provided in two ways; a garbage bin equipped at housing facilities and a designated place on the street side. As for a collection point on the street, a bird repellent net is essential to prevent crow pecking. The point is that bags are entirely covered with the repellent net. Otherwise, crows will take a try pecking out the garbage from an uncovered part of the bag. Any colour of the net will do as there is no specific colour that crows dislike. The best and most commonly used is the yellow one, a specialized crow repellent garbage net.

Tend kitchen garden with the harvesting season in mind

If you grow vegetables, tomato or eggplants in a kitchen garden, be careful not to miss the time of picking. Crows know when to eat them at best and may visit your garden to enjoy the taste, probably before you know it. To protect your garden, using a bird repellent net can be an easy way out. It is also advisable not to provide any “foothold” for crows as they cannot peck things while flapping. Take out the fruit growing near the ground before being a target. Or have a heart and share with them to enjoy.

The Japanese used to be agricultural people who had been suffering from crow damage that remains a negative impression on the bird. In Japan, crows are the bird that frequently appears to graveyards, which has led to an old superstition saying “When crows cry, someone will die.” Although the crow is a bird of curiosity, often shows cute and lovely gestures, makes people feel like feeding for support, it may be better to leave crows undisturbed during their breeding season.

Things to know about the mortgage and revolving mortgage loans, the difference in each loan type, and the registration/deregistration procedures.