How to Drive in Japan !!

A motor vehicle is indeed convenient when you go for shopping and trips. As the use of a multilingual car navigation system is more common, automobiles are more frequently used among foreign residents/visitors in Japan. While the increase of drivers with an international driving permit (IDP), traffic accidents by foreign drivers are also gradually increasing, unfortunately. Most of such traffic accidents are likely to happen because foreign drivers are unfamiliar with traffic rules and road conditions in Japan, and here you will find some of the basic information that will help non-Japanese drivers to drive safely.

In Japan, driving is on the left

Japan is a country of left-hand traffic, similar to the UK and Australia. While traffic in the majority of the world passes on the right side, most foreign drivers who came to Japan will be confused at first. Visitors and newcomers planning to drive in Japan should be very careful and keep calm for driving safely. It has been said drivers tend to encounter a car accident around intersections where the driver needs to take several actions simultaneously – watch out for pedestrians at the crosswalk, for cars coming up from the opposite side, and turn the wheel at the same time. Moreover, drivers from left-hand countries need to keep in mind not to get into the opposite side of the road when turning right/left at the intersection. 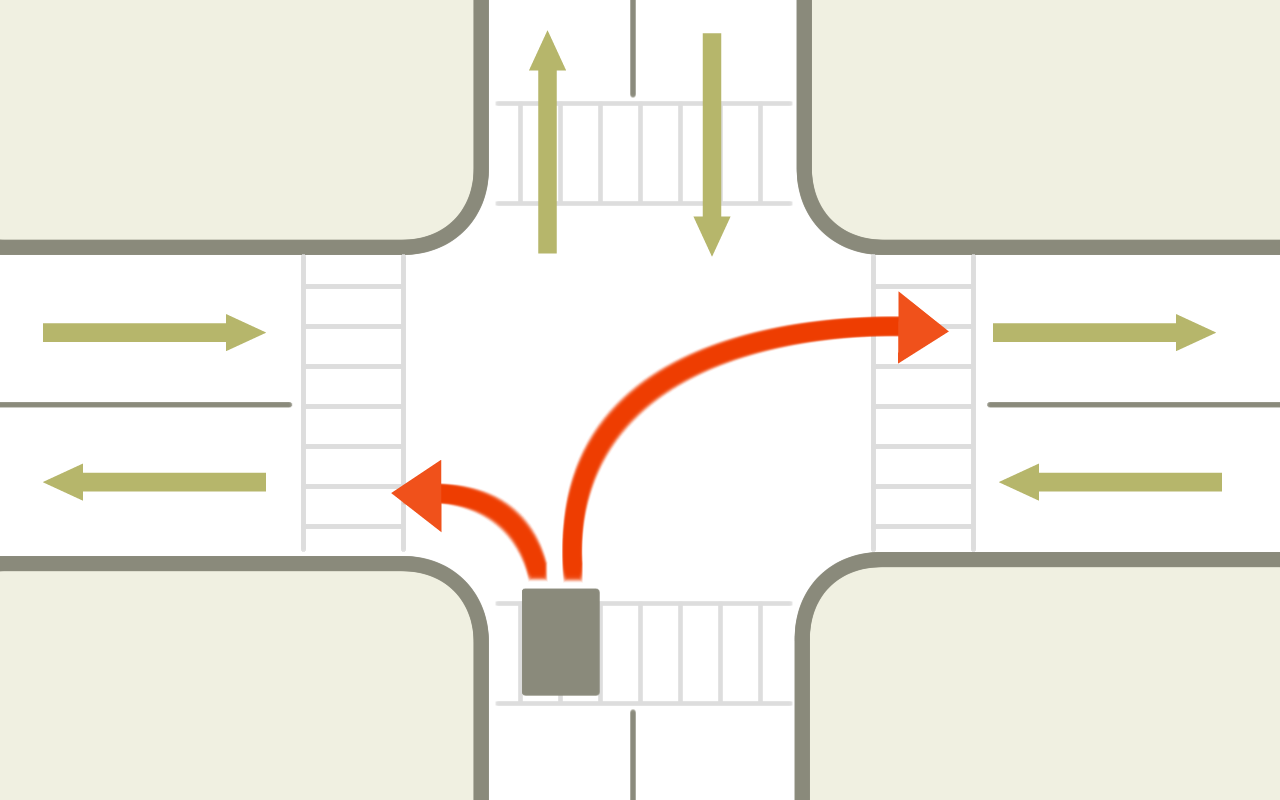 Turning right/left at an intersection

Extra information is here. It says that the left-hand driving system in Japan has derived from a traditional custom in the Samurai era, in order to avoid frictions between samurai people walking on streets. Samurai used to wear their sword at their waist on the left side, which of them may hit each other if samurai people walk on the right and pass by.

Cars in Japan are right-handed.

Japanese automobile manufacturers usually provide only right-hand-drive cars in Japan. If you prefer to have a left-handed Japanese car, you will need to import the one. As for foreign brand-cars, the manufactures usually offer customers an option to select left-hand or right-hand when the customer orders. One thing to remember is that the traffic system and the relevant services in Japan are based on the convenience of right-hand car drivers, which may bother left-hand car drivers. Drive-through windows and ticket machines at parking facilities are usually set on the right side of the road, within reach only from a driver’s seat of the right-hand car.

If you need a car during your trip, etc., the vehicle you can rent will be a right-hand car. Left-handed cars are hardly available on site. In case you prefer to rent a left-hand car, search for a service company offering that types of rental cars, usually imported or luxury cars, and make a reservation in advance.

Things to know about driving in Tokyo

Central Tokyo is known for heavy traffic and tangled narrow roads, annoying many drivers who don’t know much around the area. Although the districts such as Ginza and Nihonbashi have well developed broad streets, there are many off streets and one-way roads that are not divided clearly between a sidewalk and roadway. 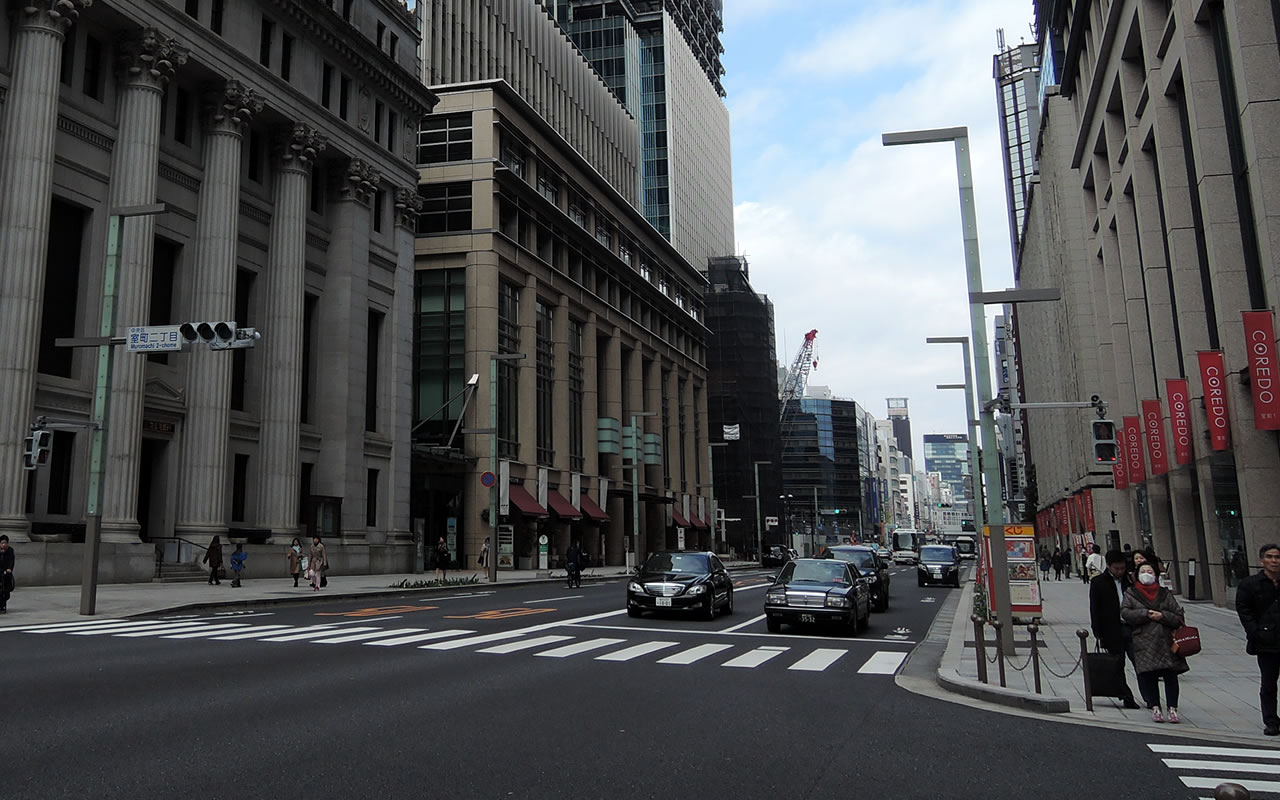 An intersection at Nihonbashi, Tokyo

The hardest-to-drive place in Japan can be the road around the Imperial Palace at the heart of Central Tokyo. The broad road is orderly, looks easy to understand, but it has multiple lanes allowing drivers to travel toward only indicated directions. Furthermore, one of the lanes leads to an entrance to an expressway that makes many drivers confused to know which lane to take. You should check a map beforehand as well as using a car navigation system when you drive there. 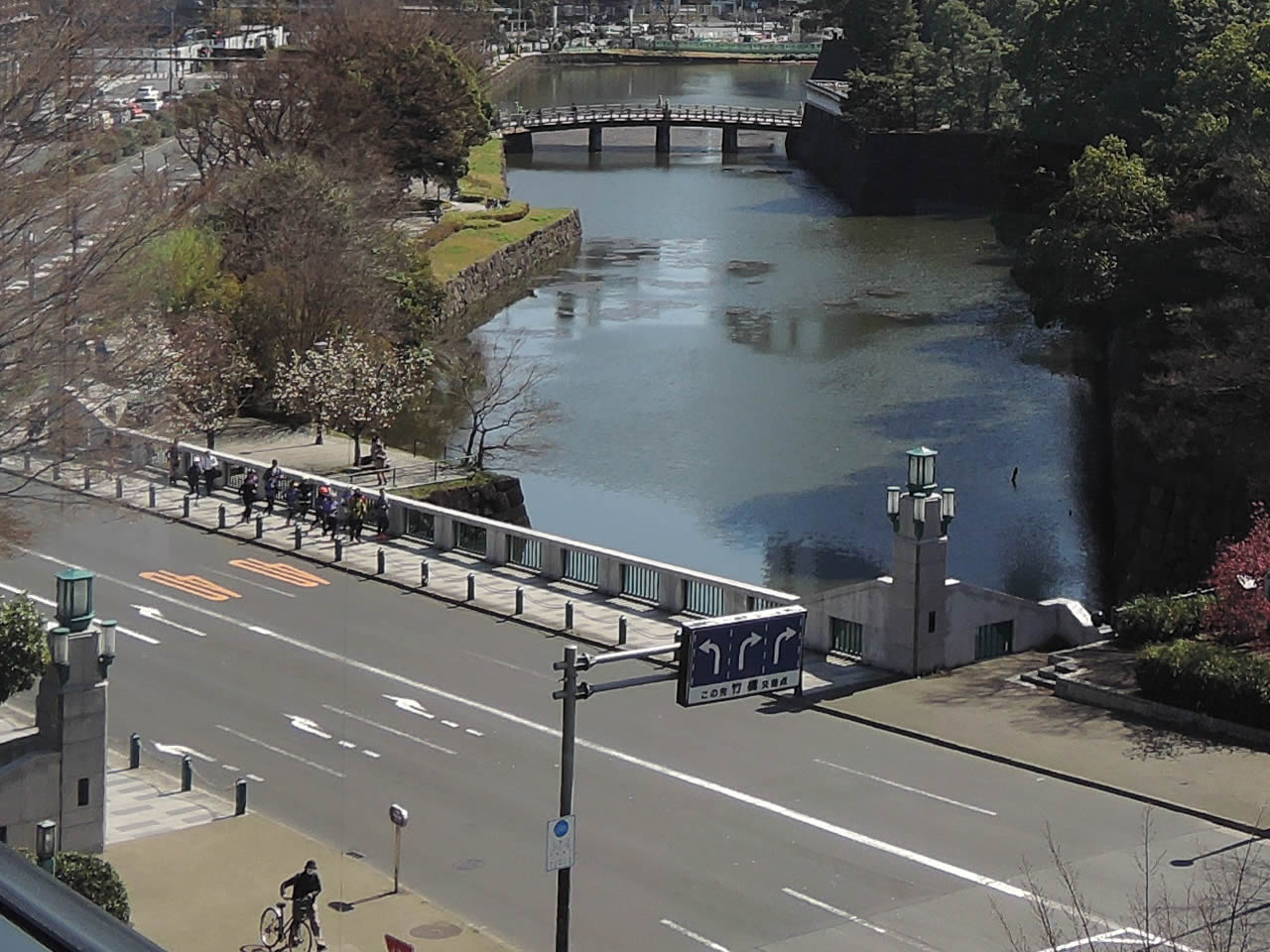 The road around the Imperial Palace

Broad streets with three lanes allow drivers to get good visibility and drive easily. However, it may require drivers to do lane-changes as it regulates traveling directions by lane. For example, on the way approaching an intersection, the third lane on the rightmost side may become a lane only for vehicles turning right. On the other hand, there are also rightmost lanes not allowing right turns. Drivers need to check the arrow sign over the lane/on the road to find the traveling direction to follow. 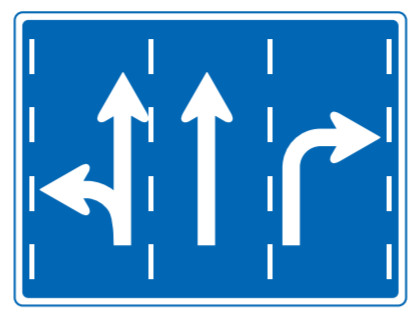 Be careful not to take the wrong road and go into an expressway!

Remember that some of the large roads lead to an entrance of an expressway, a paid road, where any vehicles are NOT allowed to turn back. To know which way is leading to an expressway, carefully see a green signboard at the entrance ramp. If a driver enters an expressway by mistake, the driver has to go through the road and get off at the nearest exit. Again, No U-turn is allowed. Drivers who enter by mistake tend to try going back drive in the wrong direction, which has been a problem among even Japanese drivers.

Driving in the wrong direction on the expressway is so dangerous that it often causes fatal accidents. Drivers should keep in mind that they will be at risk, especially when they take a rest at a service area and then go back to the road again, where drivers from right-hand-traffic countries should be more careful. 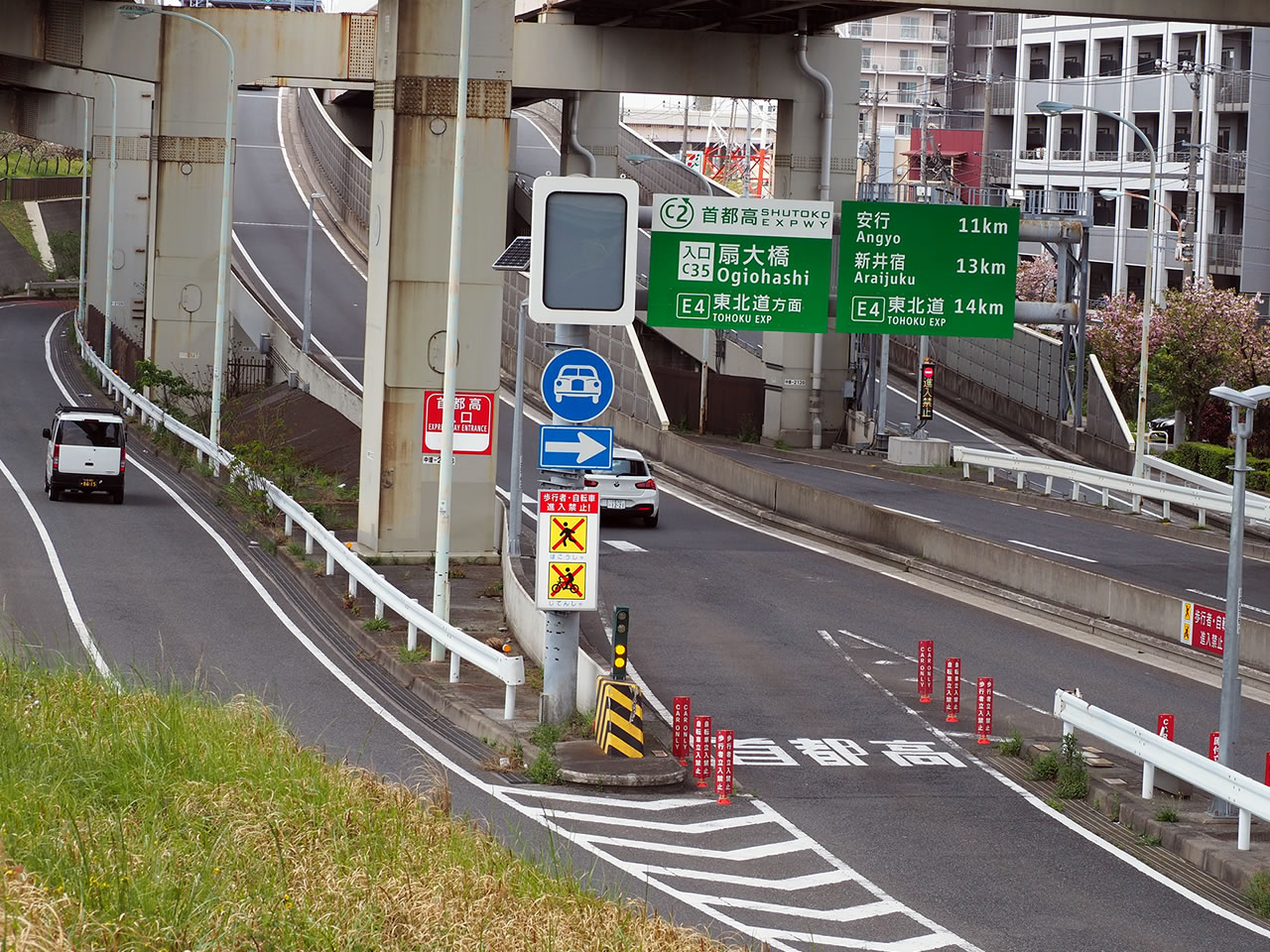 An expressway entrance in Tokyo 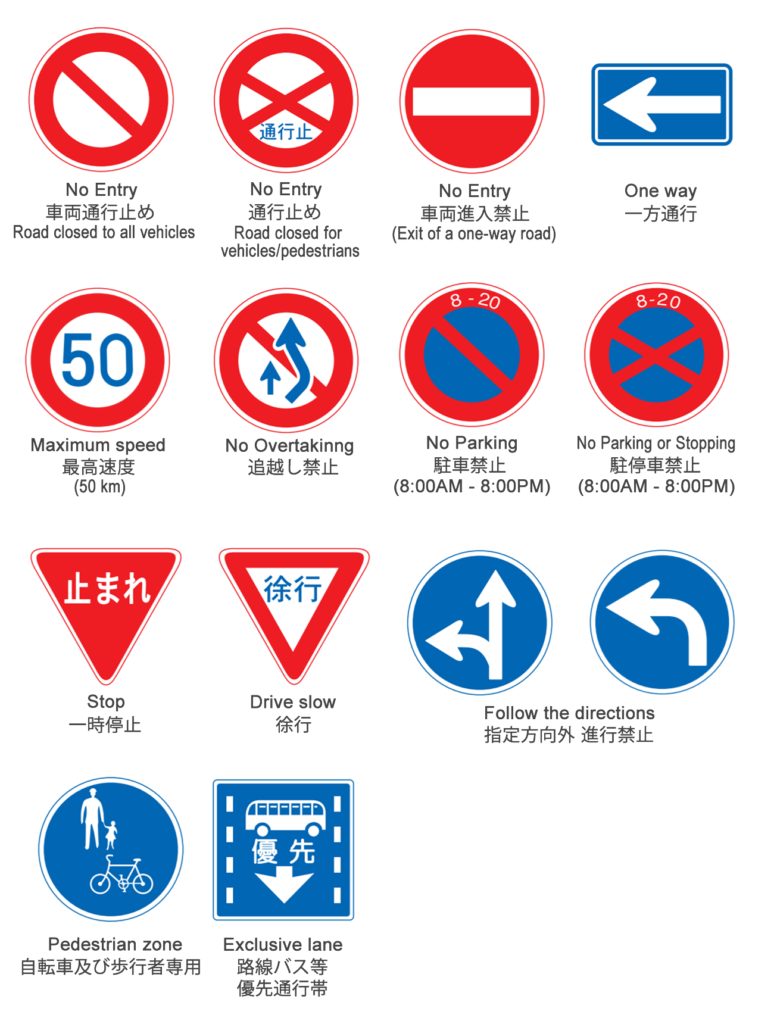 Beginner drivers and aged drivers are obligated to place a sign on their vehicle as below. The sign sticker can be purchased at a car accessory shop or home improvement store. 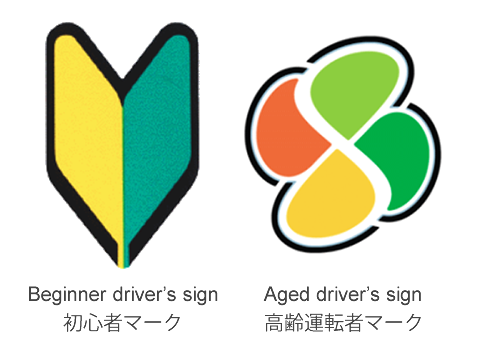 What does the diamond mean?

The diamond shape on the road is a sign indicating a point approaching a crosswalk or bicycle crossing. The sign comes with two diamonds, one is placed at 50m, and the other is at 30m ahead of a crosswalk. 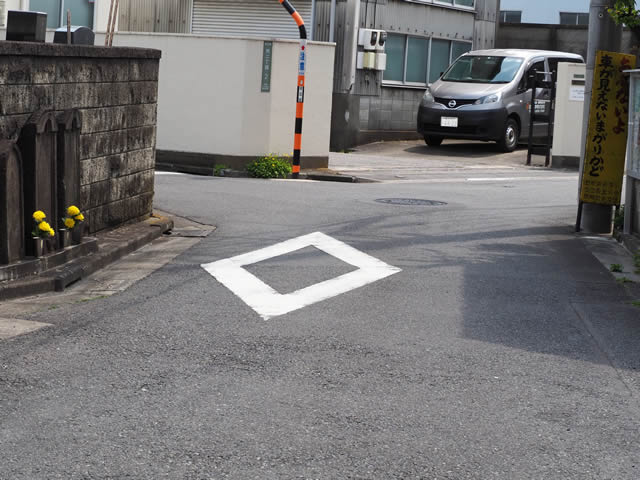 Procedures at the Ward Office for Moving

Here you find how to make the most of PASMO, a prepaid smart card known as IC Card.

Tsuyu, the rainy season in Japan | Living in Japan

The rainy season in Tokyo is around from early June to 20 of July. Here you find about the season and how to cope with high humidity.