Garbage troubles, being caused by improper disposing of household wastes, tend to be a beginning of a problem with neighbors. The way of the garbage disposal and its regulation is different from area to area, which often gets newcomers confused. Keeping a friendly relationship with your neighbors is always essential for a comfortable life, and we hope the information here will help avoid such a problem.

How do I dispose of household waste? When? Where?

Where do I find a collection point and when to take out the garbage?

Garbage is collected on different days at a different point depending on the area you live, so you need to ask at your local municipal office for the information which is available offline and online. If you are living in a rental house/apartment, you can ask your landlord.

You need to put out the garbage at your collection point

In the case of an apartment, garbage is collected in a container (Garbage box) usually provided on the premises. Although the rules on how and when to put out garbage may differ from each apartment, in principle, people are to take out the garbage in the morning on the collecting day. If the apartment has a garbage box with a solid lid that helps to prevent from beasts, birds, and arson fire, it may allow the tenants to leave garbage the day before collecting day. (You need to ask your landlord). However, considering that bugs, rats, and bad smell problems arise, garbage should be taken out in the morning right on the collection day.

High-rise condominium and upscale apartments are often equipped with a food disposer in the kitchen. Disposals are also provided on each floor, allows the residents to put out garbage for 24 hours a day.

The garbage collection point for people living in detached houses

Collection points are designated at blocks of each district, and inhabitants are to take their garbage bags to the location on the collection day. The time when to take out garbage varies depending on the area you live, is usually required to do so on the day of collection by the time between 8:00 and 8:30. You are not allowed to leave your garbage on the previous day of collection, and here again, that is the rule you must follow to avoid troubles with your neighbors. In most of the cases, the collection point is temporarily provided at public spaces such as on the side of the road, where crows will mess up and arson fire may occur if garbage bags are being left for a long time. 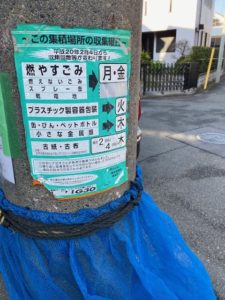 What if I don’t sort garbage properly?

If you take out a garbage bag without sorting properly, it is refused to collect and left at the collection point that you are to take it back home and sort out again. The garbage left there will soon be giving a bad smell and annoy people living nearby, including you, due to crows will make a mess or could cause the fire by arson.

Types of garbage bags to use

The bag to use for disposing of garbage must be transparent or semi-transparent so that it can show inside whether the garbage is sorted properly or not. The garbage in a black bag is refused to collect. If you have something to dispose of which you hesitate to be seen by someone, you can wrap it up with paper or put it in a white bag, then put in a transparent bag.

The garbage bag is called Gomi-Bukuro ゴミ袋or Poly-Bukuro ポリ袋 in Japanese, sold at supermarket or drug stores. Poly-Bukuro is made of polypropylene, which is burnable without generating toxic gas. Plastic bags (Reji-Bukuro レジ袋), made of polypropylene, are also allowed to use at some local municipalities. To find if you can use the plastic bag or not, ask at the municipal office in the city you live in. 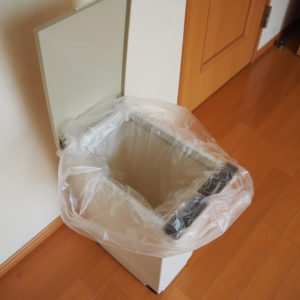 Trashcan with a Poly-Bukuro bag

Is the dispose of garbage for free? Or to pay fees?

Although household garbage is usually collected for free in Japan, it has started to become a paid service in some municipalities, such as cities having no incineration facility. In case of fees are charged, you are to pay the collection fee by purchasing the garbage bag which is locally specified to use at the place you live in. If you live in a city with paid garbage collection service, it is advised you carefully select and buy only the specified bags as the garbage in other bags are refused to collect. To find whether the collection is free or not, ask at the local municipal office where you live.

As for business-related garbage, collection and disposal is a paid service at any municipalities, and the payment is made in different ways such as; asking recycling companies to collect, and buying a ticket (label) and put it on the garbage.

Part 2 – How to separate household waste; burnable, unburnable and recyclable garbage, and how to dispose of oversized garbage

For finding your property
for Rent
for buy and sale

Tips for finding rental properties in Japan: The reason why applying earlier is the better

Things to know when finding the best rental homes and apartments in Japan, including how to take advantage by applying early.

Tsuyu, the rainy season in Japan | Living in Japan

The rainy season in Tokyo is around from early June to 20 of July. Here you find about the season and how to cope with high humidity.