”Kamon” is a family crest that any Japanese people have. The Kamon crest, known as the first kind logo in Japan, traditionally features flowers, plants, and geometrics, which has artistry that still impresses people today and can never be dated. Kamon is rarely used in daily life lately but remains as a tradition which you may find in ceremonial occasions, wedding or funeral. Kamon is not exclusively for Japanese people, and everybody is allowed to have the one freely.

It seems the Kamon history goes back to the late Heian era, between the 11th and 12th centuries, as aristocrats began to use Kamon for a symbol of the kin to distinguish the status and the family origins. Aristocrats placed Kamon crests in chic design on their clothes and cow carriages, and the artistic design brought popularity leading to becoming a Japanese culture.

In the 12th century, the age of civil strife, Samurai warlords began to place Kamon on their flags, swords, and armors, so that they can identify themselves and to show the Shogun their achievements on the battlefields. During the samurai era, the design of Kamon was transformed to be even more recognizable and iconic in the Cool-Japan style in order to stir the enthusiasm of samurai warriors, and the variation of Kamon dramatically increased in number.

In the 17th century, in the Edo era, people other than aristocrats and samurai warlords also began to own and use Kamon, as there was no regulation in its possession. Business people such as merchants, wealthy farmers, and Kabuki actors particularly well used the Kamon for creating a brand image, and you can still find some of those Kamon logos in the trademark of long-established companies.

The actual use of Kamon by ordinary people began around the middle of the 19th century, and the Kamon started to be handed down among each family generation to generation. Although people rarely use Kamon these days, the use of Kamon remains by custom, for example, Kamon can be seen on traditional clothes or gravestones. 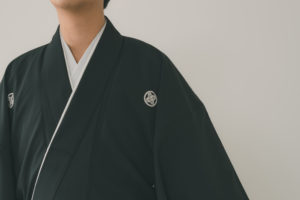 The Kamon usually includes a spiritual meaning, philosophy, or wishes. One example is that vigorous plants and trees – wisteria, oxalis, and Myoga (Japanese ginger), are often seen in the design of Kamon. It says the number of Kamon designs reaches 20,000 or even 50,000 while anybody can design freely. In fact, the majority of those designs have derived from traditional basic templates, and the real number of Kamon with a name and being in actual use will be about 5000.

Kamon has been recognized by its artistic character not only in Japan but also in other countries. In 1896, the era Japonism was in vogue among Europeans, Georges Vuitton seemed to be inspired by Japanese family crests and developed the original design ‘Monogram Campus,’ comprised of his company’s logo LV along with flowers and stars. (Source from Kotobank Nipponica, by Shogakukan) 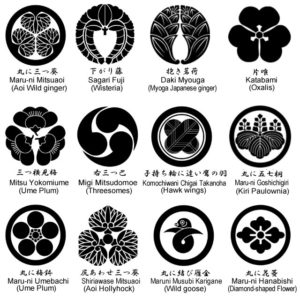 Kamon crests of the renowned clans in history have been so famous that most Japanese can identify them by looking at their crests. For example, the Tokugawa clan, the shogunate family of the Edo period, owned the Kamon called ‘Aoi-mon*’(Maru-ni Mitsuaoi), which features wild ginger leaves (Asarum Caulescens). If you have a chance to visit a temple or shrine in Japan, just try and have a look at the building there in detail, the door, roof decorations, etc., where you may find Kamon crests. If the Kamon you see is of Aoi-mon, it tells you that the location has a history associated with the Tokugawa clan. At the historical buildings related to the imperial house of Japan, you will find the Kamon of Kiku-mon* (chrysanthemum) with sixteen petals, which is also designated as the national emblem of Japan. 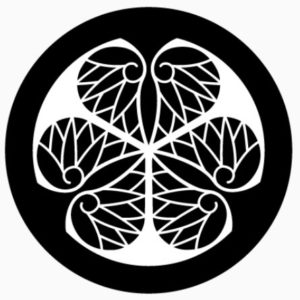 How do Japanese people know their own Kamon?

Since Kamon has been unfamiliar these days, many Japanese, especially those in the young generation, actually do not know what Kamon they have. However, people need to know their Kamon in some situations, such as having to place it on black ceremonial kimonos (Montsuki) or curve on the gravestone. In that case, they need to find it in one way or another, usually by asking grandparents or looking at the gravestone of their forefathers.

Those who failed to find their Kamon will end up to select and determine the one by themselves. Searching with a keyword phrase ‘Surname and Kamon (自分の姓＋家 家紋),’ it will show “possible candidates” on the search result where people can select a favorable one. The “possible candidates” means people can hardly find the exact true Kamon of their family. There are many families who have the same surname but different crests while every family has determined their Kamon as they liked, and some families own even several crests. That is why people need to select one from those possible candidates, otherwise, making up an original design will be an option.

How do I get a Kamon?

Kamon is for anybody, and you can have one Kamon as you like. Although there is no specific registration required for use, be sure and not to use the Kamon of the imperial house/national emblem of Japan. Also, note that famous Kamon crests of long-established companies, samurai clans, temples and shrines may have been registered as their logo or trademark, which are not allowed to use for business purposes. You may consider it is not allowed to use any Kamon for business purposes, other than personal use to enjoy. It will be OK to put Kamon on a replica armor, T-shirts, or such personal items of yours.

Guidelines on deals of properties - rental houses, apartments, summarised about Jikobukken that dealing tends to be in trouble.