How to obtaining a driver’s license in Tokyo

A car is convenient for everyday shopping and leisure. Many of those planning to stay in Japan are likely to consider obtaining a driver’s license. Here you find information about driver’s licenses/permit required for foreign drivers, the types of valid licenses, and how to obtain one of them.

What required to drive in Japan legally?

Foreign drivers are not allowed to drive in Japan only with a driver’s license issued in their country. They are required to obtain a license/permit under certain conditions, including the length of stay and nationality. The requirement for foreigners to drive in Japan comes in three different ways. Note that the types of obtainable license/permit vary depending on the country you are from.

Foreign drivers are required to hold one of three licenses/permit;

1. International Driving Permits (IDP)
Valid for 1 year. Usually taken by foreign drivers who stay in Japan for several days or longer up to 1 year. IDP is issued only in certain countries.

2. Valid foreign driving license with Japanese translation to carry with
Valid for 1 year. Taken by drivers only from specific countries that are authorized and IDP is not issued there.

3. Converting to a Japanese License (Obtaining of a Japanese driver’s license)
A regular driver’s license in Japan, taken by foreign residents staying in Japan for several years or live permanently. There may meet some requirements when applying. The driver test may partially be exempted.

Foreigners who hold an International Driving Permit (IDP) can drive in Japan for one year. IDPs are obtained in countries/states signatory to the Geneva Convention, must be in conformity with the Convention’s provisions. IDP is not issued in the countries without the signatory.

To find whether your country is the signatory or not, see the website of National Police Agency;
List of the contracting states of the Convention at Geneva 1949
(ジュネーブ条約締約国一覧)
https://www.keishicho.metro.tokyo.jp/multilingual/english/traffic_safety/drivers_licenses/geneva.html

The International Driving Permits (IDP) for foreign drivers are not issued in Japan. You need to obtain it in your country. If you plan to drive in Japan, be sure and get the IDP before arriving in Japan.

IDP is not renewable. If your IDP expires and you need it again, you are supposed to go back to your country and get a new IDP issued. One noted here is that drivers who have not spent at least three months before re-entering Japan are not allowed to drive in Japan even if they have an IDP.

Valid foreign driving license with Japanese translation to carry with

Foreign drivers from specific countries, where IDPs are not issued, can drive in Japan with their driver’s licenses by carrying its translation.

The authorized drivers are those from countries that are not a signatory to the Geneva Convention, providing the equivalent license system to it in Japan. The countries/regions currently include; Belgium, Estonia, France, Germany, Monaco, Switzerland, and Taiwan.

The Japanese translation must be prepared by a cabinet-order-specifying authority, such as a translator authorized by the embassy or consular office of the issuing, or organizations designated by The National Public Safety Commission.

To make an application, you need to prepare necessary documents and visit a Driver’s License Center運転免許センター in the prefecture where you have residence address. You cannot ask a representative to file an application as it requires you to follow a process that includes identification confirmation and an eye test. If you don’t speak Japanese, you will be advised to bring an interpreter.

Note that the application is acceptable only for those who have been in their country for more than three months after obtaining a driver’s license. Therefore, applicants need written proof of the staying period, usually passport showing the date of immigration. Other necessary documents will be; a copy of residence certificates, your foreign driver’s license and the official translation (by a cabinet-order-specifying authority), identification (e.g., Insurance card, Residence card), and a photo. The required documents and the condition for test exemption may vary depending on the state of the applicant. To find detailed information, see the official website of the National Police Agency of Japan.

Test exemption
In the case of license conversion, applicants may be exempted from taking written and practical/road tests. Foreign license holders, who are identified as a good driver having appropriate knowledge and skills to drive in Japan, will be allowed to apply without taking driving tests. Also, those who have a license issued in one of 29 countries/regions are allowed to apply with the exemption.

Remember, Japan is a left-driving country, and the practical/road test is carried out with a right-hand car. If you are not familiar with the traffic system, it is advisable to practice at a driving school beforehand.

Don’t forget to renew your license.

Japanese driver’s license is valid for 5 or 3 years, requires renewal. The validity period ends one month later of your date of birth. The renewal notification is mailed about one month before the birthday. You are supposed to renew your license within a month before/after your birthday (two months in total).

If one month passed after your date of birth, you are not able to renew your license. If you move out and your residence address is changed, be careful not to forget updating the registered address on your license. Otherwise, you will miss receiving the renewal notification mail, and the license will be expired before you know it.

For renewing your license, go to Driver’s License Center or a specified police station. What to bring for application are;

It is suggested that foreign drivers bring a residence card, just in case.

The application process includes an eye test that is essential to pass for renewal.  The pass/fail criteria is 0.7 or approx.20/28 or 6/9 for both eye (0.3 or approx. 20/66 or 6/20 for each eye.) If you fail the test, you need to retake the test with a preparation – resting your eyes for a while to recover clear eyesight, or buying new glasses, etc. Since application places are usually crowded, especially during weekends, you will get in trouble if you fail the test and have to come back again to go through the application. If you feel insecure about the eye test, you may prepare glasses.

Once you pass the eye test, the rest of the procedure is simple. You move on to the next step, taking a portrait picture for your new license, and have a lecture, usually for 30 minutes, up to 2 hours (depending on the state of your license,) and you receive your new license card then and there. 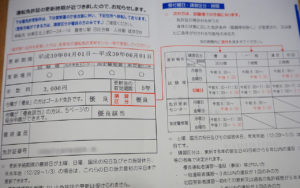